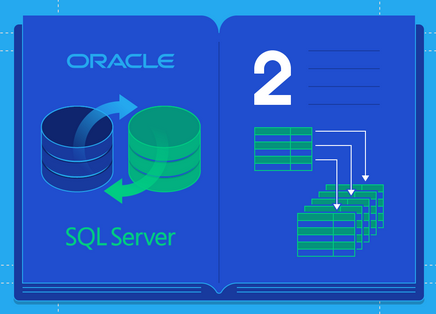 Why should businesses migrate database Oracle to Microsoft SQL Server? While the performance and scalability of Oracle cannot be doubted, substantial licensing costs can cause a major dent in the profitability of an organization. This is felt more when there is a need to upgrade existing systems and infrastructure or modernize data implementation. Most enterprises are still using the traditional on-premises database version but with exponential growth in data handling loads, more processing power and storage volumes are required. This adds to the cost of data. Hence, database Oracle to SQL Server migration, either on-premises or to the cloud (Azure Cloud), is the most opted route for optimizing data costs and performance.

The licenses of SQL Server are more affordable than that of Oracle. SQL Server is very user-friendly and unlike Oracle, does not need the services of a DBA to be run. Further, costs can be kept under control and within the IT budget on the SQL Server through database consolidation, virtualizing servers, and compression of data. Finally, SQL Server is secure and ensures high data safety through a network of complex encryption algorithms.

Apart from these features, there are several advantages of the SQL Server.

These are some of the advantages that make Oracle to SQL Server migration an economically viable option for organizations.

While there are several advantages of SQL Server, and Oracle to SQL Server migration process is largely automated, it is undoubtedly a complex one, throwing up several challenges during data transfer. Focus on these issues during and after migration.

After Oracle to SQL Server migration is completed check for data type differences and mismatches. Also, verify numeric and date/time values which should not be stored in dissimilar precision and scale.