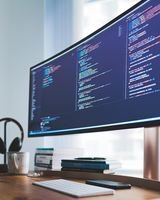 Released in 1995, Java has become the most popular OOP language. Its security feature is one of the main reasons why it’s become so popular. Being secure, reliable, and fast, Java became programmers’ first choice. Moreover, the number of websites and apps that run on Java is increasing by the day, and more and more apps won’t work unless you’ve got Java on your machine.

Programmers experience firsthand the change brought by the rapid development of technology, and it can be quite hard staying in the game and being up-to-date. Every year there’s something new, no matter whether it’s entirely new software or just an improved version of existing software. There’s no end to the learning process. It’s become clear by now that there is no way anyone’s going to keep up-to-date with everything, so we didn’t make a list only of everything “hot” and trending this year, but on the old but gold classics that’s worthy of spending your time on too.

Focusing mainly on non-linear workflows and integrity, Git is an entirely free open-source system. Gits branching capabilities are what made it so famous in the first place. Being cheap and simple to merge Git branches offers every change in the codebase a totally isolated environment.

While Git functions only locally, GitHub is a cloud, more of a hosting service for Git repositories. GitHub is nothing more than an elevated version of Git, easing out collaboration on the same project between teams.

Theoretically, you could still be able to process projects made in Spring 2.0 in Spring 4.0 or Spring 5.0, also, upgrading from Spring 2.0 to much newer versions is doable.

Designed to ease out application development, Docker uses containers that allow developers to equip the app with everything necessary and box it as one.

This feature is beneficial because the developer can be sure that the app will be correctly executed and run on every Linux machine, no matter how customized it might be. Many DevOps teams will agree that Docker is not just another new “hot” tech of the moment but a real game-changer and for sure an ace in the sleeve everyone should have.

Although very similar to a virtual machine, Docker doesn’t create a virtual OS. Instead, has come out with the unique idea of reducing the application’s size and ultimately boosting the app’s performance. Namely, Docker will give the application access to the same Kernel as the system. So how does this speed everything up?

Once the app has access to the same Kernel as the system it’s run on, the only files that are needed for the app to be up and running are the ones that aren’t already in the Kernel’s memory. That’s how the optimization is achieved.

Everything and everyone is going into the clouds, literally! Offering significant cost savings, everyone is shifting into the Clouds. Delivering everything – from servers and storage to the networking and analytics online, the Cloud’s popularity is fast-growing because of the flexible resources and definitely a worthy asset.

Cloud Computing has a bright future ahead because of the low operation costs and because the whole world is going digital. So it’s just a matter of time when everybody is going to all work on clouds.

Developed by Google for building modern and Dynamic web applications, Angular is a front-end framework.

Angular has made testing extremely simple. Using module separation, you can load all the necessary services while still doing the testing. They’ve elevated things to that level, so if you use the “one file-one module,” there is no need to remember and rely upon the whole module loading order thing.

No need to rely on other third-party libraries; Angular allows you to build dynamic apps. Angular is so powerful it can build SPAs on its own. RESTful API handling, AJAX handling, two-way binding, and modularization can be found among the numerous Angular features.

Everything’s going virtual, and now more than ever, there is an enormous need for developers of any kind. Did you know that statistics say every second a hiring manager is looking for java developers for hire somewhere in the world? Nevertheless, a common issue is finding the person with the right skill set to fit the business’s needs.

There will always be some new and trending software or new releases of an existing one. However, the catch here is finding a balance between what’s asked on the market and your personal preferences. Fortunately, the IT sector is enormous, so there’s space for variability and changing your career path if you wish so.