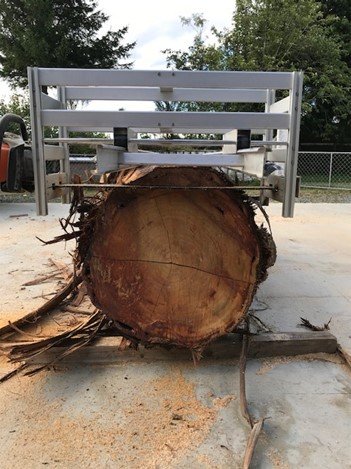 If you have had enough of wondering what certain terms mean when looking up information on sawmilling or even forestry, we have you covered. Here is a glossary for some of those words for letters H through to Z.

Hardwood – A word used for mostly broadleaf trees that are very often deciduous which includes elms, oaks, ashes and maples.

Head rig – When a log goes through a machine to be tuned into flitches and cants that is a head rig.

Heartwood – The core inside a tree is the heartwood.

Kerf – When a cut is made by a saw into a piece of wood that is the kerf.

Knot – Where a branch melds into the body of the tree is a knot.

Live Sawing –  This is a method of cutting. You cut halfway down a log on the sawmill then flip it 180 degrees and saw more until the log is done. It is also known as through and through or slab sawing.

Loader – The equipment used to move lumber and logs onto a transportation vehicle.

Log – Lengths of a tree cut into pieces of 8 feet or more.

Lumber – When the wood has been processed it is referred to as lumber.

Planer – The smooth surface on wood is created by a machine called a planer.

Porosity – How many pores hardwood has is referred to as its porosity.

Pulpwood – When wood is cut with the intention of it becoming wood pulp to be used as fiberboard, paper and such it is referred to as pulpwood.

Pruning – When trees, dead or alive, need to have some branches and such removed it is called pruning. It produces better quality wood that is knot-free.

Rip-cut – When a cut is made following the same direction as the wood grain it is called a rip-cut.

Sapling – Trees that are small, usually below 30 feet.

Sapwood – In a growing tree, the sapwood is the outer part that stores nutrients and carries water.

Saw guide – When a band saw or circular saw needs steadying this is a saw guide.

Sawline – The mark where you can see the wood has been cut is the sawline.

Saw mill – May refer to the machine used to do the cutting of logs, or to the facilities where you can bring wood to be cut or buy it.

Seasoning – This is the process of drying out lumber or wood whether naturally or artificially.

Slash – After you have logged, pruned and performed any other forestry operations the items left on the ground like bark, branches and such are called slash.

Stand – A group of trees that are in the same area and are similar in age and condition are called a forest stand. A pure stand has 80% of the trees of the same species, and a mixed stand describes the rest.

Timbers – Logs and cants that are used to build with.

Top saw – On a head rig the upper part of the two circular saws.

Treated wood – When wood has been preserved chemically.

Veneer – These are thin wood sheets often used in plywood and for making furniture.

Windfall – When a tree has been broken or uprooted by the wind it is referred to as windfall. It can still be put through a sawmill and used.

It was published in the newsletter TechCrunch that Synchron...
Read more
Previous article
All You Need To Know About The History Of Astrology
Next article
Best Forms of Party Entertainment in the 2020s