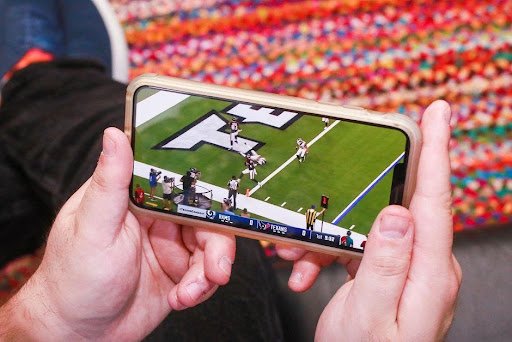 There was a time when you were either glued to your living room TV or had to grab a seat at the local pub to watch your hometown heroes strap on a helmet and go to battle on the gridiron. In some markets, it would be blacked out if the game didn’t sell out, which meant listening to the game on the radio was the only available option.

But that was a long time ago and now we are no longer tethered to our televisions because we can watch our NFL teams, whenever and wherever we want, thanks to online streaming services. But which mobile devices are the best of the best for watching the National Football League at our viewing pleasure? Let’s discuss some of the options and get ready to watch some football this season!

The new iPhone 13 will be released any day now and I am certain that a case will be made for its inclusion in a list like this. However, you can’t go wrong with the iPhone 12 if you’re in the mood to sneak a peek at a football game when you’re at an event that requires your attendance, if not your undivided attention.

Those who enjoy making a wager or two on a Sunday afternoon will want to quickly peruse the NFL betting lines in search of the best number before they click on over to the game of their choice. And if you happen to be a fan of the iPhone then this iteration will not disappoint.

The iPhone 12 has amazing clarity and a screen big enough to bring you into the game and make you want to stay. At about $900, it’s moderately priced considering it resides in the premium class of mobile devices. It will soon be supplanted by its successor but if you can still find one, buy it, it’s worth it!

This is the newest edition of Sony’s premium mobile device. It’s pricey but it’s a dandy. If you are an android user then take the Sony Xperia 1 III for a test ride. You will notice the stunning clarity of the pictures and the crystal-clear professional-grade video.

As for the specs, we will tell you that it has all the bells and whistles that make a high-priced, state-of-the-art device like this run like greased lightning. And those spiffs include a Qualcomm Snapdragon 888 processor, 5G support, 12 GB of RAM, resolution of 1644 x 3840 pixels, 256 GB in storage, and a whopping 6.5-inch screen display. How nice will that be for watching all the bone-crushing hits and touchdown grabs on NFL Sunday?! This nifty little number will run you about $1200, so it isn’t cheap, but you may never want to switch.

Are you ready for some football? Well, you better be because if you want to bring the game with you then there isn’t a better choice on the market than the Samsung Galaxy S21 Ultra. This is the biggest dog in the Samsung kennel and it has a huge 6.8-inch display screen to check out every slow-motion replay of every game. It is a testament to cutting-edge technology and the staggering clarity of the pictures and videos on its mammoth display screen takes this technology to a new level.

Like the other premium mobile devices in the market, this one will run you about $1200 but that seems to be the price you have to pay if you want the best in class. A 5000mAh battery will ensure that you don’t miss a play on Sunday, and when you want to take a picture it has four cameras in the rear and a 3x zoom lens coupled with a 10x zoom lens to catch all the nuances that most cameras can’t. It is nothing short of stunning.

Now that we have listed arguably the best three mobile devices to watch an NFL game it would be a perfect time to discuss two of the best apps to stream those games. And there is none better than the league’s official app, the NFL mobile app. This will catch you up to speed with the latest scores, and all of the breaking action from every game being played, as well as those that have recently finished. Its Game Center does all of this and even has drive charts for those that geek out to the x’s and o’s.

The NFL Network is another stellar choice that every true-blue NFL fan needs. It will go wherever you go and you can watch all of the all-preseason games as they are being aired or later on when you want to watch them taped. The NFL Thursday Night Football games are included as is coverage of the NFL Combine, NFL Draft, and NFL Gameday just to name a few.

Although there are many ways to get into cryptocurrencies,...
Read more
Previous articleWhat’s New on Madden NFL 22?
Next articleNew Esports Games on the Rise